We are open for submissions for the 2021 Prole Pamphlet Competition from 1st June to 16th September.

As ever, we are looking for writing that exemplifies the values of Prole: writing that engages, entertains and challenges the reader. We are completely open in terms of style and subject matter, it’s quality that counts.

Open for submissions from 1st June until 16th September, 2020.

The winner will be announced in December and published in early 2021.

We’re looking for between twenty and forty pages (A5) of poetry.

The winner receives £200 and 25 copies. (Further copies can be supplied at a discount.)

John McCullough - see below for details.

Send your entry as an attachment with nothing on the attachment to identify you. Fees can be paid here on our website using PayPal. Use the button below.

My post: Send your entry with a cover letter with nothing on the manuscript to identify you. Cheques payable to P Robertson. GBP only. 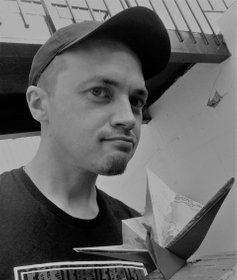 Our judge is John McCullough. John lives in Hove. His first collection of poems, The Frost Fairs (Salt), won the Polari First Book Prize in 2012 and was a Book of the Year for The Independent as well as a summer read in The Observer. This was followed by Spacecraft (Penned in the Margins, 2016) which was a summer read in The Guardian and shortlisted for the Ledbury-Forte prize. His latest book of poems, Reckless Paper Birds (Penned in the Margins, 2019) was recently shortlisted for the Costa Poetry Award. The judges said “This collection – hilarious, harrowing and hyper-modern – offers a startlingly fresh insight into vulnerability and suffering.”

Find out more about John on his website here.

We are pleased to announce that the winner of the 2019 Prole Poetry Pamphlet Competition is Still Lives with Apocalypse, by Jennifer A McGowan.

From its opening words, ‘Wednesdays I smoked weed with Jesus…’ I was immediately drawn in. Jesus features throughout the poetry sequence that gives the pamphlet its title – but it’s a Jesus you’ve never known before.

The intelligence and wit, equal awe and irreverence in McGowan’s poems had this small collection stand out from the beginning, and as I returned to several entries, very good entries, it was this one that kept calling me back.

When we went live with this competition and it was announced that I would be judging it myself this year – largely to save on a judge’s fee and to offer more prize money – it was mentioned on social media that I might recognise a poet through their work. And I did. More than I thought, in fact – and not necessarily by recognising or remembering poems, but themes, places. Besides, this competition was based on content and substance, not on personalities - shame other recent events weren’t. I did recognise Jennifer’s work as several had appeared in Prole, but put together – along with the previously unpublished title sequence – it is greater than the sum of its parts and I had to be true to myself and go with what I felt was the best collection as a whole, and I have.

Judging proved to be very difficult once I had whittled down a shortlist. Some very strong contenders that I do hope to see published were:

An Invisibility of Ptarmigan by Jill Munro

It seemed it was all about the women this year.

We will be publishing Still Lives with Apocalypse in the new year.

A huge thank you to all who entered.

The winner receives £400 and 25 complimentary copies with the opportunity to buy more copies at a discount price.

Brett Evans lives in his native north Wales. For the last 10 years Brett has co-edited the poetry and prose journal Prole. Brett’s poetry has appeared in such print and online publications as Poetry Wales, The Interpreter’s House, The Frogmore Papers, Bare Fiction, Other Poetry (he really misses that mag) Mainstreet Rag, Ink Sweat & Tears, The Poetry Shed among others. His ‘Directed by Sergio Leone’ was a runner up in the 2012 Cardiff International Poetry Competition. Brett’s pamphlets ‘The Devil’s Tattoo’ (2015) and ‘Sloth and the Art of Self-deprecation’ (2018) are both published by Indigo Dreams. 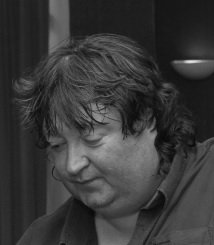 The results are in!

With many thanks to Mab Jones for judging this year's Pamphlet competition, we can now announce the winner. Her response to the winning pamphlet and commendations are below. All entries were judged 'blind'.

My Hotel by Scott Elder

I'm sure these will find success elsewhere.

Spring in the Hospital

After reading all entries, re-reading, reading again, sifting, re-reading, making notes on a spreadsheet, re-reading, drawing up a longlist, re-reading, drawing up a shortlist, reading again, making notes, and then drawing up a even shorter shortlist, which I read and re-read until my head ached, coming to a final decision was extremely difficult. In the end, Spring in the Hospital won out, for a number of reasons. Firstly, it was extremely cohesive, the poems exploring a particular subject / setting (illness / disease / hospital), and this gave the pamphlet as a whole much depth and resonance. Although I’m not a stickler for the idea that pamphlets must always do so, some other submissions suffered from their lack of, at the very least, thematic coherence, jumping from theme to theme, subject to subject, with a variety of different styles and voices, so that the end effect was of a collection of ‘poems leftover from other projects’. Here, the feeling was that the writer journeyed across a certain landscape, stopping here and there to examine things in closer detail before continuing, with the over result that the reader (I) was pulled along, and purused those particular items, with them.

Secondly, the poems were very well formed, with an excellent mix of the graphic and florid, and a sublime use of space / breath / caesura. Each piece drew me in and left me, afterwards, with something - an astounding image, a feeling of shock, a heart-punch, a wondering or questioning. I not only felt totally engaged, but punched here, cwtched there, made to mull on this, made to query that, until the very end with that wonderful snow image which came back to me again and again. A really powerful, yet remarkably light and readable, series of poems. I read it many times and the poems remained sharp, succinct, intelligent and interesting, whilst also offering up something new each time. Springtime in the Hospital is a profoundly accomplished poetry pamphlet, in my opinion.

Again, this was a wonderfully cohesive series of poems, full of depth and intelligence, and with a pleasing amount of quirkiness and wry humour. I particularly enjoyed the variety of form and voice, here, with some poems containing more than one speaker / style of speech, and an interesting use of shape and / or spacing in others. A very well executed, excellently-written series of works.

I really enjoyed the concept behind this pamphlet, which takes the stories behind real objects and historical events / characters as its inspiration. This made for a very original and unpredictable series. I don’t think I have ever read a poem before about frozen fruit cake found in the Antarctic!! Very interesting, very well written, and a delight to read.

These were the details of the pamphlet competition, 2018.

Please be aware, we are active editors and will work with the winner to ensure the pamphlet is the very best it can possibly be.

Entries will be passed on to Mab who will judge 'blind'. ie/ We'll make sure entries delivered to her are anonymised.

There is a fee of £12 for one entry and £20 for two entries. You can use the PayPal button, below (preferred) or by cheque, made out in GBP only to Phil Robertson.

Please send entries as a Word attachment to submissionspoetry@prolebooks.co.uk and include 'pamphlet' in the submission line and quote your PayPal transaction number - or send by mail to:

Try to avoid using your name on the body of the submission to make it easier for us to make sure entries are sent anonymously.

Thewinner will be announced and the pamphlet launched on October 1st, 2018.

Mab Jones is a "unique talent" (The Times) who has read her work all over the UK, in the US, France, Ireland and Japan. She is winner of the John Tripp Spoken Poetry Audience Award, the Word Factory Neil Gaiman Short Story competition, the Aurora Poetry Award, the Rabbit Heart Poetry Film Festival Grand Jury Prize, and the Geoff Stevens Memorial Poetry Prize, amongst others. Her most recent collection, 'take your experience and peel it', is published by Indigo Dreams. Her first collection, 'Poor Queen', was published by Burning Eye Books. She teaches creative writing at Cardiff University, writes for the New York Times, and has presented two poetry programmes on BBC Radio 4 with a further one due later this year. She also coordinates International Dylan Thomas Day. 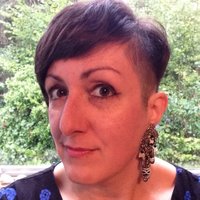 The Winner of our first pamphlet competition is Robert Nisbet with Robeson, Fitzgerald and Other Heroes. Many congratulations, Robert - a very worthy winner.

Robeson, Fitzgerald and Other Heroes will be published in November and available here on our website.

Thank you to all who entered. Your support helps us to continue with Prole.

Many thanks also to our judge, Fiona Pitt-Kethley, for her professional work.

Judging the Prole pamphlet competition proved an enjoyable experience. The good thing about a pamphlet competition, rather than one for an odd poem, is that it sorts out the worst entrants. If you have at least a couple of dozen poems to present, you are beginning to be serious about the business of being a poet.

As I narrowed down my list, I felt that there were a dozen or so from decent poets who perhaps had other books or pamphlets out there, or at least a lot of magazine publications. Some sounded as if they were good performers too. In the end, I had to narrow this list even further to provide one actual winner. This wasn´t that easy as there were several I liked.

I had started off looking for a pamphlet with a central theme, as this is something I usually prefer. Some of those in the final list had this, others not. Robeson, Fitzgerald and Other Heroes only has a loose theme, but it held up to plenty of rereading so I chose that as the winner. I had the feeling of a good poet crafting poems well on a variety of subjects.

I liked  People Pie, which, as the title suggests, has quite a cast of characters running through its poems. I especially liked the opening poem of the series.

I would also like to give a kind of special commendation to three others for staying very close to their chosen themes. Words from the Water, which has a very Welsh feel and concerns the flooding of valleys to make reservoirs. Lots of anger and sorrow there.  Fowl, Wild and Water is a likeable collection of nature poems on birds. Last, but not least, The Sand Gathering Railway is a series of vignettes relating to the the Nazi occupation of Jersey. These are vividly imagined unless the writer is in his late 80s and was there at the time. Rather curious to know if this is the case.

I had to make a choice...but I also hope that all these writers get a pamphlet out from one or other press soon. In the case of the two shortest of the above, another poem or several would make the work even better.

Words from the Water - Ellen Davies

Our judge was the excellent Fiona Pitt-Kethley. Fiona is the author of more than 20 books of prose and poetry. She lives in Spain with her family and an adopted colony of feral cats. She is currently writing prose and poetry books on the area. Her hobbies are mineral-collecting, fishing, hillwalking, snorkelling and playing the cajon.

All entries were judged anonymously.